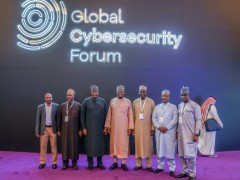 Click the image to view pictures from the event

The Ministerial team from the Federal Ministry of Communications and Digital Economy in conjunction with the Nigerian Communications Commission (NCC) held a 2 – Day Management Retreat from August 19 – 20, 2022 at the Transcorp Hilton Hotel Abuja themed “Effective Management in the 4th Industrial Revolution”. The Governing Board of the Commission was also in attendance and The Executive Vice Chairman, NCC, Prof. Umar Garba Danbatta gave the welcome address.

Brilliant presentations were made by the facilitator, the Honourable Minister of Communications and Digital Economy, Professor Isa Ali Ibrahim (Pantami) on the following subjects: Management Leadership Skills for the 4IR, Skills for Effective Management, Healthy Habits for High Performance, The Role of Mentorship in Building a Successful Organisation, Reading and Research as Prerequisites for Top Performance and lastly, Prioritizing Skills to Enhance Performance.

The Secretary USPF, Mr. Ayuba Shuaibu led the delegation of USPF Management Staff that participated at the event. 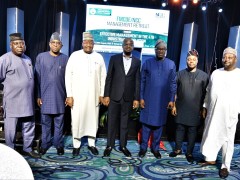 In a bid to successfully secure a Digital Nigeria, the Universal Service Provision Fund (USPF) in collaboration with other parastatals under the Ministry of Communications and Digital Economy have implemented fifteen (15) new projects commissioned by the Honourable Minister of Communications and Digital Economy Dr. Isa Ali Ibrahim Pantami during the Batch 11 and 12 virtual commissioning ceremony on August 13th and 19th, 2021 respectively.


Click to view pictures.
The event kicked-off with a welcome address by the Chairman of the Project Commissioning Committee and Secretary USPF, Mr. Ayuba Shuaibu who championed four of the projects on the agenda. He described the event as a cause to celebrate as the Honourable Minister gives leadership and direction while consistently bringing new ideas and innovations in the Ministry. He stated that Pantami is the chief promoter of digital entrepreneurship culture in Nigeria.

The implementation of these projects by the various parastatals demonstrates the Ministry’s continued confidence in a Digital Nigeria, while also pushing for e-education in the most critical areas.

Speaking during the Commissioning, Pantami credited and commended all stakeholders, particularly board members and other staff of the Ministry and all parastatals for the success of the project. He also highlighted how the Ministry formulated up to sixteen national policies in less than the two groundbreaking years with a minimum of at least one project benefited in each geopolitical zone and over 1667 commissioned projects. More so, the ICT sector is currently the fastest growing sector in the Nigerian economy, according to the National Bureau of Statistics.

The Executive Vice Chairman, NCC, Prof. Umar Garba Dambatta, who joined the occasion virtually expressed his heartfelt congratulations to the Honourable Minister on the very eventful two years in office, the Telecom Industry and ICT Sector. He also credited him for showing no hesitance to lead from the front. The DG, National Information Technology Development Agency (NITDA), Mr. Kashifu Inuwa also applauded him for his second-to-none implementation of projects and policies in terms of economic diversity.

Some Major Achievements of the Buhari Administration Under the Federal Minister Of Communications & Digital Economy, Prof. Isa Ali Ibrahim Pantami from August 2019 to July 2021

The Minister of Communications and Digital Economy Isa Ali Ibrahim (Pantami), stPhD, FNCS, FBCS, FIIM resumed office as Minister on the 21 of August, 2019 The Communications and Digital Economy sector has recorded a number of unprecedented achievements under his leadership. For example, the sector played a pivotal role in lifting the Nigerian economy out of recession, with the ICT sector recording the highest growth rate in the 4 Quarter of 2020 (14.70%), as reported by the National Bureau of Statistics (NBS) th and stated by the President.

This growth rate was the only double-digit growth rate and it exceeded the aggregate growth rates of all the 2 to the 7 fastest growing sectors. The ICT sector also had the highest growth nd th rate in the year 2020 and the 1 Quarter of 2021. It is also noteworthy that the st telecommunications sub-sector grew at 15.90% and this was its highest growth rate over the past decade. Additionally, the Ministry and its parastatals have generated over N1 Trillion for the Federal Government in less than 2 years, this translates to an average of about N44 Billion every month or over N1.4 Billion every day! For example, about N360 Billion of this revenue was largely from Spectrum, allocated by the National Frequency Management Council (NFMC), under the Chairmanship of the Minister, to the Nigerian Communications Commission (NCC) and National Broadcasting Commission (NBC) for commercial purposes. Another over N600 Billion was paid as taxes by ICT Companies to the account of the Federal Government through the Federal Inland Revenue Service (FIRS).

Over the last 2 years, a significant number of National Policies have been developed to create an enabling environment for the sustainable growth of the Communications and Digital Economy Sector. This has led to the resolution of challenges that had lingered for close to a decade.  Sixteen (16) of these National Policies have been developed and over a dozen of  these are already being implemented. As part of the implementation of these policies, over 1,667 projects/centres have been established, and an additional 455 are ongoing.

Over 219,000 Nigerians have directly benefited from training on digital skills and this number does not include several others that have benefited from such trainings indirectly. Furthermore, there have been over 61 million unique NIN enrollments. Almost all the achievements here are unprecedented.

Projects At A Glance